Black with a Silver Streak

Count Ravyncrowe is a member of the South Park Vampire Society who first appear in the Season Twelve episode "The Ungroundable". His name was revealed in the removed vampire kids quest in South Park: The Stick of Truth.

His first appearance in "The Ungroundable" was going out to the goth kids' hangout spot and suggesting it would be a great place for a vampire meeting. He and a younger vampire are scared off by Henrietta.

He is later seen in "Goth Kids 3: Dawn of the Posers", at the noon meeting for the South Park Vampire Society. He sat in the second row, beside Larry and behind Vladimir. He does not play a significant role.

He and some other vampires in the Vampire Society make a brief appearance during the "Black Friday" trilogy, where they are seen throughout the episodes as part of Stan Marsh's army to fight for the PlayStation 4 systems.

Ravyncrowe wears black shoes, black pants, a black jacket with a wide triangular collar and red trim, square yellow-tinted sunglasses, black fingerless gloves, and a red shirt with some kind of word on it. He has longish black hair with a silver streak on the front left side. He has eyeliner as well.

In the game he wore a red suit with a white undershirt underneath and his glasses had red lenses.

Ravyncrowe and a younger vampire looking to hold a meeting at the goths' hangout. 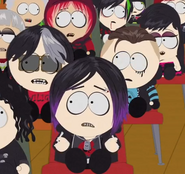 Ravyncrowe sitting beside Larry in "Goth Kids 3: Dawn of the Posers". 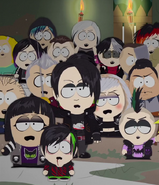 Rayvncrowe during the "Black Friday Trilogy", fighting for the PS4 in Stan's army.

Ravyncrowe's design in the Cemetery Quest. 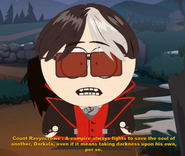