South Park Archives
Register
Don't have an account?
Sign In
Advertisement
in: Organizations, Coon and Friends, Characters,
and 4 more
English

Coon and Friends was a superhero team formed by The Coon to fight crime in South Park in the hopes of building a franchise.

The original team first appeared in the episodes, "Coon 2: Hindsight", "Mysterion Rises", and "Coon vs. Coon & Friends". They later returned and expanded in "Franchise Prequel", only for the team to be torn apart by different franchise plans, a battle that was the primary focus of South Park: The Fractured But Whole.

The final team lineup consisted of The Coon, Human Kite, Mosquito, Fastpass, Super Craig, and Captain Diabetes before they were absorbed by the Freedom Pals.

Amid an alleged crime wave, in town, the the Coon brought together eight heroes including himself at an elaborate headquarters constructed in his basement to form a team that could combat the rise in crime, offering them access to his resources, which are largely common household items, including basic equipment and electronics such as televisions and computers, with added Coon-branding. They had access to a "Coon Mobile", driven by Liane Cartman and more; however, members were asked to pay unspecified dues and fees for membership to enjoy these services. Only two members of the team were known to possess real superpowers, Mysterion and Mintberry Crunch.

Their first mission was to help rescue people from a burning building, but the firemen, who were already there, keep them away from the scene for their safety. Captain Hindsight then arrives, tells the firemen what they did wrong, and leaves. The firemen consider the problem solved, and drive home, leaving 14 people to burn. The people's admiration for Hindsight enrages the Coon, who becomes obsessed with forcibly recruiting Captain Hindsight into Coon and Friends, planning to dress Butters Stotch as Courtney Love and faking provocative photos of the two.

The group then attempts to help the victims of the DP oil spill, planning to sell lemon bars at a bake sale to raise money, however this gets set back when the Coon beats up Mosquito and Mintberry Crunch. The Coon is kicked out of the group by a unanimous vote for this and then grounded by his mom for beating up his friends and swearing soon thereafter.

In "Mysterion Rises", they proceed with the bake sale, gaining plenty of press attention and making some money for charity. Mysterion becomes the de facto leader, although it is presumed they take on a democratic vote, as suggested by Mosquito in "Coon 2: Hindsight". They decide to keep the name 'Coon and Friends' specifically to spite the Coon, which Mysterion finds greatly amusing. The Coon, meanwhile, forms a new organization under the same name by teaming up with Cthulhu, printing matching 'Coon and Friends' T-shirts for only the two of them.

In "Coon vs. Coon & Friends", the Coon returns to town and implores Cthulhu to banish the members of Coon and Friends at Coon's command, to the City of R'Lyeh, though Mintberry Crunch manages to run home before the banishment proceeds. Mysterion manages to escape by committing suicide and being reborn in the real world, while the others remain there waiting for help. They are ultimately rescued by Mintberry Crunch and brought back to the real world thanks to Mysterion.

The Coon and Friends reassemble in the Season Twenty-One episode, "Franchise Prequel", hoping to kick off a superhero franchise. Fastpass wins an audition to join the team after telling them his superhero origin story, while Professor Chaos, with Mark Zuckerberg's support, creates fake 'news' about the Coon and Friends group on Facebook ruining their reputation and keeping Netflix from greenlighting their superhero franchise. Super Craig is seen as a member of the group for the first time here, with Wonder Tweek appearing briefly at the end and Scott Malkinson is also mentioned to be a member.

While Zuckerberg is trespassing into the town, Fastpass runs around him, providing a distraction for Tupperware, and fires bursts of energy at him, to which Zuckerberg fires back in his mind but misses every shot. The Human Kite then punches him in the crotch, sending him to the ground. He is subsequently attacked by all the remaining members of the Coon and Friends.

Zuckerberg stands up, and the Coon and Friends dramatically fall to the ground. The Coon announces to the citizens on site that Zuckerberg had attacked innocent children who were simply trying to save black lives, and simultaneously support Jews, and crippled people. Zuckerberg is thwarted by the Coon and Friends and is forced to take down Facebook, ruining Professor Chaos's plan.

Despite this, the group separates at the end of the episode due to petty franchise differences, introducing a major conflict that would be revisited in the South Park video game, South Park: The Fractured But Whole.

As of the end of South Park: The Fractured But Whole, the team is defunct and has merged into Freedom Pals. Below was the lineup of the team at the time of the merger.

When night falls in South Park, Eric Cartman takes up the call and dons the Coon costume. This fearless crime fighter is the only one who can sort through the trash can of society. As the founder of Coon and Friends, the Coon is the mastermind behind the greatest superhero franchise of all time and will stop at nothing to see it realised.

From high above the battlefield the Human Kite, alias Kyle Broflovski, swoops into action striking fear into evil-doers everywhere. Blasting away his foes at range while supporting his fellow Coon Friends, the Human Kite is a powerful ally to have on your superhero team.

Bzz! Bzz! Bzz! That's that sound of justice when served by Mosquito. When Mosquito enters the fray, enemies are quickly drained of their will to fight...and blood. Behind closed doors, this insect-human hybrid superhero is better known as 4th grader Clyde Donovan.

Lightning quick in battle and in wit, Jimmy Valmer adopts the persona of Fastpass to fight crime. Fastpass uses super speed to blindside his opponents. When he's not fighting side by side with the New Kid, Fastpass helps citizens travel quickly throughout South Park with his Fast Travel stations.

Charging into battle, Super Craig uses super strength and a powerful sense of indifference to defeat evil. Accompanied by his guinea pig, Stripe, he is a proud member of Coon and Friends. Hidden behind his Super Shirt, Super Craig is actually Craig Tucker, local 4th grader.

Scott Malkinson could've been an ordinary child, but in a freak accident his mom farted on him during childbirth which gave him diabetes. Rather than dwelling on his misfortune, Captain Diabetes wields his sugary illness as a source of power that his enemies cannot overcome.

The following characters were members of the team in the "Coon 2: Hindsight" trilogy of episodes: 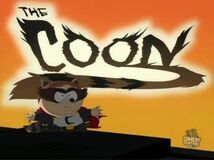 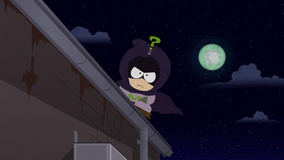 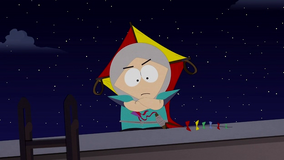 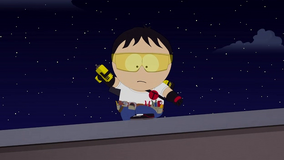 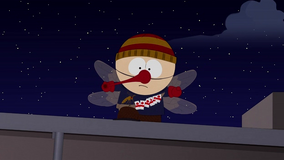 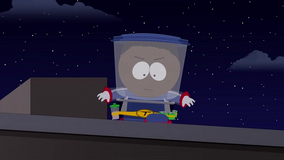 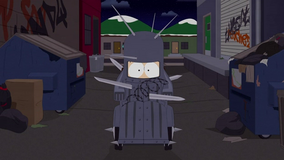 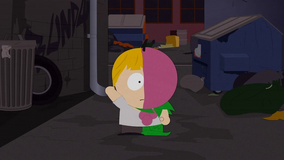 Known as the Coon Lair, the secret headquarters of Coon and Friends are actually located in the basement of Cartman Residence.

The passcodes to enter the Coon Lair are as below:

Images of Coon and Friends

The Coon and Friends Logo