The City People are various residents of South Park who are generally used as background characters. Despite this, at least one of them has a line in most episodes.

City people first appeared in Season One episode "Weight Gain 4000" where they watch Kathie Lee Gifford coming to South Park, after that episode, they have started appearing in every episode since.

Though they may sometimes speak or be addressed, their names, jobs, relationships, and personalities are imprecise and subject to change frequently. Several of them are used as parents of background children (especially in the early seasons) such as Millie Larsen, Filmore Anderson, Heidi Turner, an unnamed 6th grader, Chad Handler and others, though in many cases such as Heidi, they were later seen with specific parents.

In the first several seasons, they tended to share a basic body type similar (but not identical) to Herbert Garrison and Sharon Marsh, with round heads and wearing differently colored jackets and black shoes. They used simplified palletes and appeared simple and generic.

Around the twelfth season, new background characters (both children and adults) were created with more diverse shapes in their heads and bodies and more defined outfits. These characters are now used much more prominently, and the older versions are rarely seen in current episodes, appearing mostly in the crowd scenes, where they are placed behind or at the bottom of crowds, while the citizens of the new seasons are placed in front.

In Season Nineteen, several younger, 'hipster' designs were added to the City People to emphasize the season's storyline, and they have continued to appear as background characters since.

Some character models seem to be recycled from unique characters that have appeared in previous episodes, even characters not living in South Park, such as Ben, the president of Blizzard Gaming Entertainment, and the Bigfoot Researchers. Even characters who have been seen being killed continue to appear in the background of the episodes, such as Enchorito Mark or Tom.

Several townspeople are thrown against a building in "Death"

Several townspeople are seen in the courtroom of this scene in "Sexual Harassment Panda".

A huge line of Town People in "Cartmanland".

Town People in "The Entity".

An alternate image of City People.

The current appearance of the Town People.

Mark with his wife talking to Mr. Rodriguez in "You're Not Yelping".

Townspeople at the end of "Free Hat".

A group of townsfolk seen desperate for the vaccine throughout "South ParQ Vaccination Special".

Enchorito Mark and his Wife

Michael's Parents ("Up the Down Steroid") 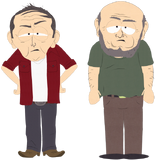 At the beginning of the game they play their role as a character, which is simply walking around the city and appearing inside the places as decorations. They play a bigger role later when the game is almost over, where they are transformed into Nazi zombies that will be the enemies that The New Kid will face during the rest of the game. During gameplay, the models of the townspeople were back to the same simple models they had in the early seasons with a small variation in hair and clothing, though more detailed ones appear in the cutscenes. The name of the citizen with blue jacket and orange shirt is revealed as Mark in this game.

The townspeople play a bigger role in South Park: The Fractured But Whole. This time, as they now use the original models of the show, the models of the townspeople were changed to their new look, unlike the previous game. The names of several citizens were revealed in this game, though a few have since had different names in the show, such as Moira McArthur here being referred to as Sarah.