The Citizen with Brown Hair and Blue Suit is a citizen of South Park who was first seen in the Season One episode "Mr. Hankey, the Christmas Poo", where he is seen with the other adults watching the South Park Elementary Non- Denominational Holiday Play and says that a star who was above the stage was very offensive to non-Christians. He was also seen in "Cherokee Hair Tampons" buying an "all-natural ball juice" at Miss Information's shop, because he said that whenever he watches VH1, his balls start to hurt.

In the episode "The Wacky Molestation Adventure", he and a blonde woman are seen as the parents of DogPoo Petuski.

In the episode "Two Guys Naked in a Hot Tub" he is seen with a different woman at the party, indicating that he broke up with Mrs. Petuski or was cheating on her.

In the episode "Helen Keller! The Musical", he is seen with a different woman, Kelly Turner, which makes him the stepfather of Sally Turner, however, she also broke up with him.

In "Cartmanland" he is seen walking with a different daughter in the amusement park during Cartman's flashback.

He wears a yellow button-down shirt under a blue suit, dark green pants and black shoes. He has short, messy dark brown hair. In "The Wacky Molestation Adventure" he wore a white shirt under a black suit. 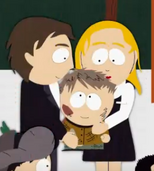 Retrieved from "https://southpark.fandom.com/wiki/Citizen_with_Brown_Hair_and_Blue_Suit?oldid=431552"
Community content is available under CC-BY-SA unless otherwise noted.