"Do the Handicapped Go to Hell?"

For other uses, see Christopher (Disambiguation).

Chris is one of Satan's boyfriends who appears in the Season Four episode, "Do the Handicapped Go to Hell?", and its sequel "Probably". He is mentioned in the Season Six episode, "A Ladder to Heaven".

Chris becomes Satan's new boyfriend after he seemingly killed Saddam Hussein. He is a Nutritionist and rather nice to Satan. However, as Satan seems to like the way Chris treats him, he is not sexually attracted to him.

In the episode "Probably", Chris and Saddam Hussein are both competing for the love of Satan. They end up in a fight, Satan brings them apart, and declares he doesn't want to be with either of them and that he needs some alone time for himself.

Chris died because of slipping down an escalator in a mall.

Chris has curly black hair with prominent sideburns, thin eyebrows, and wears black framed glasses. He wears a baby blue T-shirt with white stripes and green cargo shorts. He also wears a dark green belt, long white socks, a gold chain, and brown sandals. Aside from being moderately built, he has no other distinguishing features.

Chris is extremely amiable and mild, he is warm and kind to all people, he never loses temper and he always deals with things in a calm and peaceful manner. He insists on reconciling with Saddam even if he knows that Saddam means to kill him.

At first, Satan describes Chris' personality as "stable", but later discovers that Chris is too coward and weak to get along with him. He then calls Chris a "pussy" and breaks up with him.

Satan having an awkward dinner with Saddam and Chris.

Chris complaining in bed with Satan

Chris and Satan in bed.

Saddam stabbing Chris in the head.

Saddam and Chris walking away wounded. 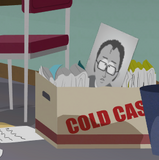 Easter egg photo in South Park: The Fractured But Whole