This is Butters Stotch's gallery.

Boy with Balls on Chin 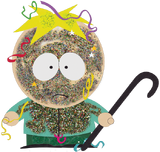 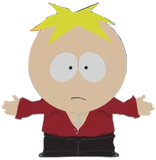 The What What In the Butt Kid 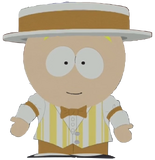 Student of the Day Butters 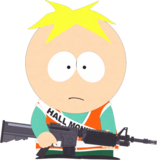 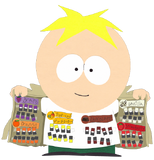 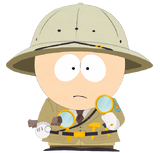 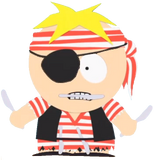 Butters in a squirrel outfit in "Britney's New Look".

Butters chained in his parents' basement in "Marjorine".

Butters as a metrosexual in "South Park is Gay!"

Butters as a pre-schooler in "Pre-School".

Butters as a pre-schooler as shown in the Stotch Residence in "South Park: The Stick of Truth".

Butters as a vampire in "The Ungroundable" trying to suck Cartman's blood.

Butters with "balls" on his chin in "Freak Strike".

Butters playing in the rain in the "It's Butters!" theme song from "Butters' Very Own Episode".

Butters attempting to play "The Lord of the Rings" by humping Kyle in "The Return of the Fellowship of the Ring to the Two Towers".

Butters wanting his 'precious', which turns out to be Backdoor Sluts 9 in "The Return of the Fellowship of the Ring to the Two Towers".

Butters, after attacking Kyle, trying to obtain his "precious" in "The Return of the Fellowship of the Ring to the Two Towers".

Butters and AWESOM-O (Cartman) in "AWESOM-O". AWESOM-O is helping Butters insert a suppository in his rectum.

Butters and Cartman as "AWESOM-O" in Hollywood.

Butters getting woozy after his liposuction in "Jared Has Aides".

Butters during his home liposuction surgery in "Jared Has Aides".

Butters showing his scars after getting home liposuction by Stan, Kyle, and Cartman in "Jared Has Aides".

Butters getting a 'Hitler' from Cartman, seen in "Asspen".

Butters in his wrestling outfit, seen in "W.T.F.".

Butters crying in front of Stan.

Him in ¨Jared Has Aides¨

Butters after becoming a celebrity in "The Tale of Scrotie McBoogerballs".

Butters with feces smeared on his walls in "My Future Self n' Me".

Butters with feces smeared on his lip, seen in "Cartman Sucks".

Butters with the Lollipop King and Snarf.

Butters running away from the evil characters in "Imaginationland, Episode II".

Butters before attempting to freeze Cartman in "Go God Go".

Butters imagining his father in "Imaginationland".

Butters trying to kick Nelly in the balls in "The List".

Butters with a goat from the zoo.

Butters going down the road to South Park in "Butters' Very Own Episode".

Butters calling his parents from a strip club.

Butters with his hand-made volcano in "Here Comes the Neighborhood".

Butters with shadows cast across his face.

Butters with a picture of him with the Denver Broncos.

Butters with glitter and ballons as a get well card in "Cherokee Hair Tampons".

Butters "rebuilding civilization" at the dump in "Casa Bonita". He is seen with a dog.

Butters with Lexus in "Raisins".

Butters getting peed on by a dog in "Good Times with Weapons".

Butters and AWESOM-O 4000 walking into the sunset at the end of his song "My Robot Friend" in "AWESOM-O".

Butters as a messenger in "The Red Badge of Gayness".

Butters heading into a bomb shelter in "Casa Bonita".

Butters tap dancing in "You Got F'd in the A".

Butters waiting for Kenny to answer the door in "Major Boobage".

Butters in bed after being queefed on by Samantha Dunskin in "Eat, Pray, Queef".

Butters as one of the apemen in "Bebe's Boobs Destroy Society".

"Future Butters" taking his liver medicine in "My Future Self n' Me".

Butters putting a loaded .38 caliber revolver in his mouth in "Faith Hilling".

Red and Wendy Testaburger kissing Butters in his dream in "Sarcastaball".

Butters in the hospital, after an allergic reaction to an almond, in "Obama Wins!".

Butters falling over at the La Resistance meeting.

Butters in hospital from "Safe Space".

An example of Butters' over-emphasized smile in the episode "City Sushi".

Another example of Butters' over-exaggerated smile in the Episodical Icon for the episode "Sarcastaball".

Butters' character card in South Park: The Stick of Truth.

Butters in "The Damned", afraid of Eric Cartman's retaliation.

Butters with Wendy in "The Hobbit".

Butters accusing Cartman of being a traitor in "Oh, Jeez".

Butters and his other male classmates calling Stan a traitor.

Butters' school photo in "How to Eat with Your Butt".

Butters as a news reporter in "Quest for Ratings".

An unknown picture of him from the ¨Imaginationland¨ trilogy.

This was him in ¨Cartman's Incredible Gift¨.

Butters is with Kenny in ¨Major Boobage¨.

Butters frightened after seeing "The Mummy".

Butters receiving a gift from the Mummy.

Butters being taken away by the police in "The Pandemic Special".
Add a photo to this gallery

Professor Chaos and General Disarray flood the Earth with a common garden hose.

Professor Chaos and General Disarray go over new evil deeds, attempting to find one that the Simpsons haven't done, as shown in "The Simpsons Already Did It".

Professor Chaos' idea to remove the cherries from chocolate covered cherries and replace them with sour mayonnaise.

Professor Chaos and a Simpson-ized Dougie.

Professor Chaos without his mask having a panic attack due to all his plans being already done by the Simpsons.

Professor Chaos taking a pie to the Thompsons in "Good Times with Weapons".

Professor Chaos with a Kenny's ninja star in his eye.

Stan trying to pull the ninja star out of Professor Chaos' eye.

Professor Chaos and General Disarray go to find Eric Cartman after Butters forgot he was up on the mountain.

Professor Chaos in the Coon holding cell in "Coon 2: Hindsight".

Professor Chaos and The Coon.

Professor Chaos' mask seen in "City Sushi", as Butters burns his "alternate personalities" costumes.
Add a photo to this gallery
Retrieved from "https://southpark.fandom.com/wiki/Butters_Stotch/Gallery?oldid=457251"
Community content is available under CC-BY-SA unless otherwise noted.