Brimmy is a 4th grader at South Park Elementary. He has remained a background character since the first season and still appears often in the show, though he has almost never spoken within the series and has no known personality.

A classmate of the boys' since the third grade, he has appeared as a background character numerous times throughout the show, especially in hallway scenes and on the playground. His invitation to Eric Cartman's birthday party in "Damien" was one of his most visible appearances. He only appeared in the classroom in "Gnomes" briefly when the kids were separated into groups.

His most notable appearance may be "Merry Christmas Charlie Manson!", where he was a voiceless participant in a riot against the fake Mr. Hankey in the Nebraska mall and committed a number of serious crimes in the process. (see below)

He has never spoken unique dialogue in the series itself, however he did let out a short grunt of pain after being hit by a dodgeball in "Conjoined Fetus Lady" and can be seen yelling "Yeah!" in "Quest for Ratings" among a large crowd of kids.

He made his first true speaking appearance in South Park: The Fractured But Whole as one of the various boys inside Raisins. His voice sounds somewhere between Kyle and Clyde's voices. This was also where his name was revealed as Brimmy, which was first coined by fans in the show's early seasons.

In "The Pandemic Special", he appears in a different classroom with a number of other background fourth graders.

In "Skank Hunt", Isla breaks up with Brimmy due to the conflict between the boys and the girls, which confirms that they were "dating".

In "The Pandemic Special", they appear to be in the same classroom separate from the main characters.

Brimmy wears a blue coat and grey trousers, and most prominently a blue cap with a bright yellow brim. Several other unnamed background characters can be seen with similar appearances to Brimmy, having different colored clothing. His coat is similar to that worn by Craig Tucker and the Girl with Blonde Hair; his hat is also similar in shape to Stan Marsh. 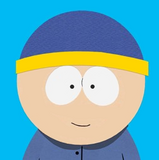 Brimmy's icon in South Park: The Stick of Truth (scrapped).

Brimmy in the episode Dodgeball about to get hit with a ball. 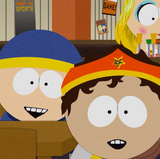 "You totally caught me waiting for my girlfriend. Yeah, she's a Raisins Girl nbd" -Brimmy on Coonstagram

Brimmy and Kenny after seeing Kyle break his nose.

Brimmy (Along with Kenny and Kyle) after hearing about the nurse's office.

Brimmy in a classroom during "The Pandemic Special".

He can be found in the Raisins restaurant and The New Kid can get a selfie with him if they have at least one active cyborg ability.