The Boy with Blond Hair is an unnamed character who first appears in the Season Eight episode "Quest for Ratings".

Since "Cartoon Wars Part I", he has made numerous appearances in the background and can usually be seen in large crowd scenes or in South Park Elementary's hallways.

He has curly blond hair which resembles Tommy Turner's, although Tommy Turner has brown hair. In "Breast Cancer Show Ever" he can be seen wearing a green jacket, blue pants, and black shoes.

Images of the Boy with Blond Hair 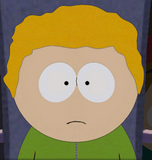 Boy with Blond Hair seen with Heidi Turner and her family.

Cameo in "Breast Cancer Show Ever".

Cameo with Meagan Ridley in "Fishsticks".

Boy with Blond Hair along with his father in South Park: The Stick of Truth.

He appears in the game's ending, after Douchebag farts on Nazi Zombie Princess Kenny's balls, proclaiming that he and his father are all better, after presumably being turned into Nazi Zombies.