For other uses, see Bill (Disambiguation).

Billy Martin appears only as a background character, with "Quest for Ratings" being his first appearance. In "HUMANCENTiPAD", his father is seen, and in "200" he is seen with a woman, possibly his mother. In "Dances with Smurfs", he is seen in a different classroom.

His name is revealed in "Bass to Mouth" in a story visible on Eavesdropper about how he got his hand stuck in his locker and how he thinks it hates him.

Billy's appearance resembles that of Gary Harrison. He wears a blue shirt, blue pants, and black shoes. He has freckles on his face. 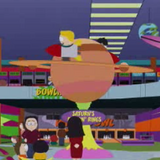 Shown at the Super Phun Time in "Super Fun Time".

He and his father in "HUMANCENTiPAD".

Shown playing basketball in "I Should Have Never Gone Ziplining".

His name as seen on Eavesdropper in "Bass to Mouth".