Farmer Bill Denkins, also called Rancher Bob, is a minor character who appeared frequently during the early Seasons. He was one of the first characters to appear on the show and owns a farm near South Park.

He used to appear frequently in the show's early years in a few notable roles, until he was reduced to a "rare" background character starting in Season Six.

In "Chickenlover", he reports another case on his farm to Barbrady, this time his chickens being molested, but the case ends quickly when Barbrady makes up an excuse not to read the letter the chicken lover had left, which ends up angering Denkins.

In "Jakovasaurs", he offers his barn to house the first jakovasaur found after Mr. Garrison is rejected by the Mayor to take care of it, and later attends the meeting at Jakov's new home.

During the Cow Days event in the eponymous episode, he allows Cartman to train with his old bull Bob at his farm for carnival.

In "Helen Keller! The Musical", Kyle and Timmy go to his farm to buy a turkey for the Fourth Grade theater, and end up being given a disabled turkey by Timmy's decision, which he charges at a higher price, much to Kyle's annoyance.

In "Scott Tenorman Must Die", He unknowingly participates in Cartman's plan to get revenge on Scott Tenorman by shooting his parents to death thinking they were trying to steal his pony. He was also among the guests at Cartman's chile party, claiming that he had the right to defend himself against invaders.

In his last featured appearance in "Fun with Veal", the fourth graders take a field trip to his farm and discover that the veal comes from the meat of baby calves, which he plans to send to market. The next day he finds out about the theft of the calves by the boys, who wanted to save them and so ended up locking themselves in Stan's room for days. In the end, when he manages to get his calves back, he concludes that they are worthless since everyone found out about their meat being sold as veal, and so decides to set them free, much to the boys' happiness. He is called "Rancher Bob" during the field trip, implying that his middle name might be Robert.

He was neither captured nor mentioned by Scott in "201", despite being the literal killer of his parents. It is possible that Scott left him out as he knew he had been tricked by Cartman into committing the murder.

He, along with other old characters, makes a cameo in the opening of Current Seasons, where he can be seen tending his farm.

Denkins has light brown hair and mustache and looks slightly taller than most other adults. He wears a black cowboy hat with a white sash and wears a red jacket with blue buttons and front pockets, as well as a gray buckle belt, blue jeans and black boots.

Farmer Denkins in "Fun with Veal". 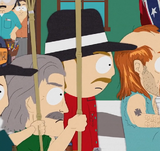 Denkins, now called "Rancher Bill", appears in the side-quest "Magical Songs", where The Bard asks him if he can buy the flute he has for sale. Denkins tells him that the flute is inside the barn with the "crazy cattle" and gives them the key to the barn after The Bard agrees to help him with them. Denkins is later grateful that The Bard and the New Kid managed to kill off the crazy cattle and gives Jimmy the flute for free. He cannot be added as a friend on Facebook.