Betsy Donovan was Clyde Donovan's mother and Roger Donovan's wife. She was of Dutch ancestry and according to Clyde, she apparently had a very good recipe for lemon bars. She died in "Reverse Cowgirl" after Clyde left the toilet seat up. However, she was later seen alive in the episodes "Jewpacabra" and "You're Not Yelping", which is likely a continuity error.

Betsy was originally referred to as "Martha" in her non-speaking debut in the episode, "Red Hot Catholic Love", but ten years later, this has been retconned and changed to Betsy, in "Reverse Cowgirl". Betsy was from a Dutch background and could even speak in its native tongue. She displayed her Dutch language and singing skills in the episode "Crack Baby Athletic Association" when she was singing a Dutch melody about Slash to Clyde over the phone.

In "Reverse Cowgirl", it is revealed that Betsy was hard on Clyde when it comes to matters such as leaving the toilet seat up, even going to his school to confront him about it. Ultimately, Clyde failed to put the toilet seat down, resulting in her death. Betsy apologized to Clyde for not being harder on him and begs him to put the toilet seat down, for his sister's sake, before she asked to be allowed to die. Her death was caused by her organs being forcefully ripped from out of her rectum, due to pressure changes caused by closing the water valve, leaving Roger Donovan, widowed, with Clyde and his unnamed sister.

In all of her appearances, Betsy was voiced by April Stewart, until her final appearance in "Reverse Cowgirl", where she was voiced by Trey Parker due to last-minute script changes.[2]

She had dark brown hair, just like Clyde and her husband. She wore a long-sleeved white top with a light brown overdress, a red belt, a gold belt buckle, and pearl earrings.

Betsy in "Child Abduction is Not Funny". 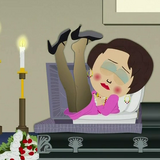 Betsy in the casket at her funeral in "Reverse Cowgirl". 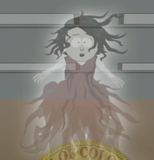 Betsy as a spirit in "Reverse Cowgirl".