Barack Hussein Obama II is the 44th and current President of the United States in both South Park and in real life. He is the first African American to hold the office.

Barack Obama is half caucasian/African-American with short black hair, a long face, a large nose and black eyebrows. He also has unusually shaped lips and wears a dark blue suit with a tie. In later appearances, his skin is slightly darker.

He is a member of a very professional thief ring, (Along with other famous people like Sarah Palin and John McCain), and he and McCain have planned it so that when one of them wins the electoral campaign, the entire world will become as distracted as possible. This will leave them the chance to successfully pull off an intricate plot to steal the Hope Diamond at the Smithsonian Institute. They succeed and fake their deaths, thanks to Ike Broflovski, and plan to travel to an exotic island to live out the remainder of their lives. Obama, however, decides to actually give the presidency a shot along with Michelle Obama.

President Obama is one of the lead members in the elaborate excuse/conspiracy to justify the actions of various rich successful men who have been caught cheating with various women by claiming an idea of an alien wizard giving men virus/spell that causes sex addiction. When Kyle suggests that they need to learn to control their impulses, he and Butters are taken to where the "alien" is housed at Independence Hall. There Obama has the boys kill the "alien," in reality one of soldiers who also calls the president on the truth of the claim. Afterward, he gives a speech that if a rich celebrity is caught again, it's because "an alien wizard has cast his mighty spell."

Main article: FunnybotPresident Obama told the US that Funnybot had planned to nuke the United States using its and Russia's missiles. He stated that he would spend his last few hours on earth watching "Madea" movies with his family. He stated that he was embarrased, but he couldn't help it.

A Canadian version of Barack Obama in Eat, Pray, Queef. 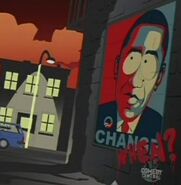 Parody of the 'Change' poster in The Coon.

Community content is available under CC-BY-SA unless otherwise noted.